How to Sell Cars with UC

> Articles > How to Sell Cars with UC

The automotive market is incredibly interesting. It is incredibly saturated, yet, with ups and downs, demand for new and used vehicles remains fairly steady. Millennials may not be lining up to buy houses, jewelry, or meals at fast-casual restaurants, but even they buy cars.

For the typical customer, buying a car sits at the intersection of needs and desires, both of which pull at their hearts and minds when they shop for their new vehicle. That’s why car buyers can feel clueless. More customers than ever know exactly how much they want to spend, either total or per month, but many do not know what brand or model is right for them.

And that’s exactly why dealerships still employ salespeople. If buying a car was a purely financial matter, salespeople would have been replaced by cashiers decades ago. But the road to the car deal is not purely logical. Many customers rely on the attention and dedication of a salesperson to help them find the car they’ll fall in love with…and ensure they don’t get wet feet when it’s time to splash out for their exciting new rides.

The Key to Selling Cars? Communication.

Every step of the car sales process relies almost entirely on the communication skills of the salesperson. And typically, most of that is done face to face. But it’s the time and effort devoted to communication with customers who aren’t on the lot or in the showroom that separates the sales legends from the run-of-the-mill top performers.

The best thing a dealership owner, general manager, or general sales manager can do to increase sales and create more sales legends is to invest in the technology that will facilitate faster and easier customer communications.

Unified Communications (UC) is the answer to the prayers of owners and managers nationwide who dream of seeing their dealership thrive and create opportunity for a new generation of sales professionals.

Business phone systems operating on a UC platform integrate all the various methods of communication into a single communications system that connects to CRMs and other business tools. This massively increases productivity by automating routine work and eliminating the time spent switching between tools.

How does UC increase sales and gross profit?

So, you’re probably wondering how improving your communications platform will increase both the quality and quantity of car deals being made in your dealership.

Let me illustrate with a story. Jeff is a sales professional with several years of experience working for a decent-sized dealership selling three or four domestic auto brands. He’s focused, attentive, and knows the sales process backwards and forwards. His customer service skills are ridiculous, and he typically closes his deals on the second pencil without manager turn-over.

Jeff lives to sell cars and loves what he does. He’s a real car guy. He’s one of his dealership’s top performers, but every month, he feels a little disappointed because he keeps hitting what feels like a limit to his sales. There’s just not enough time in the day, even working well past “bell to bell.” He has the drive and the skills to become a sales legend, but he needs the tools to push it to the next level.

Then, his dealership deployed Switchvox, the fully-featured UC business phone system from Sangoma. Jeff understood how to use it from day one, and instantly, his performance was increased. For every two cars he was used to selling, he was now getting a third one out the door. Within a year, he was being awarded by the manufacturer as one of the brand’s top selling professionals in the country. How did Switchvox help him do it?

Jeff has thrived since his dealership deployed the Switchvox UC business phone system, and so has the dealership which has increased sales by over 50% while saving significantly on communications costs compared to their older legacy phone system.

Are you ready to create your next sales legend?

Explore Switchvox, the UC business phone system designed for modern dealerships. With powerful functionality and productivity-increasing features, Switchvox is a true game-changer for every person involved in the car sales process. 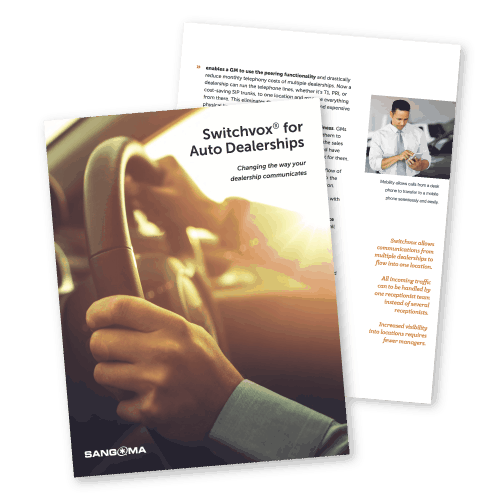 Click here to learn more by checking out our free Switchvox for Auto Dealerships guide!

Resources for Working Remotely with Switchvox

Putting Some Numbers Behind the Unified Communications Value Proposition 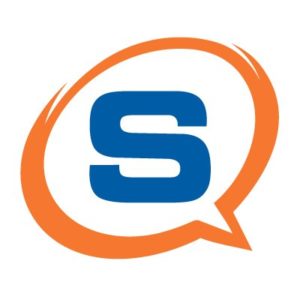