Skip to content
Menu
Menu
Get a Quote
Menu

Switchvox for VMware® and Hyper-V

A Phone System Enhanced by Virtualization

Now more than ever, small and mid-sized businesses face similar challenges, including shrinking budgets, limited IT personnel, and a lack of overall time and resources. To combat these challenges, companies are turning to virtualization. These businesses are rewarded with cost savings and simplicity by utilizing solutions that are optimized using virtualization.

Is it time for your business to switch to a virtual environment? Find out now!

A virtualized phone system solves scalability issues by placing the control of system resources in the hands of the business and away from the PBX vendor. IT may now determine what resources (CPU, RAM, storage) to allocate to the phone system, and they have the ability to adjust these resources on-the-fly to support business growth or retraction.

Sangoma provides recommended guidelines to ensure resources are properly established in order to meet performance needs, however the actual resources allocated may be set by your organization. No longer do companies need to worry that they’ll outgrow their phone system equipment. 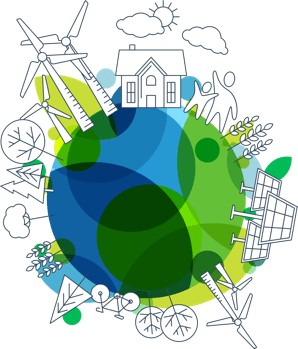 In a world with rising utility costs, managing a server room’s power, cooling, and capacity is vital. And as businesses look to lower their overall environmental impact, using separate servers for each application is viewed as wasteful.

In order to reduce the carbon footprint of your server or data room, it is essential to combine as many assets as possible. The ability to consolidate a Unified Communications solution onto shared hardware helps companies work towards “Going Green”.

Virtualization platforms include features such as live migration, high-availability, and storage migration to keep applications running even in the event of a hardware failure. It is now possible to create an environment where multiple servers act as one, allowing applications to remain online automatically and seamlessly during hardware outages.

Virtualization also provides companies with a method to create a private infrastructure for disaster recovery. Redundant virtual servers can be placed off-site, allowing systems to be accessed even in the event of a weather-related outage, power outage, or any other unforeseen event that occurs at the main office.

Simplicity and Flexibility for IT

Deploying and maintaining separate hardware for every application is time consuming and creates a constant struggle for IT to keep up-to-date. Systems that are virtualized can be deployed faster and maintained more easily, freeing up IT resources and reducing technology management headaches. Phone systems that require separate servers for individual voice applications complicate installation and maintenance tasks.

Virtualized phone systems consolidate applications into fewer physical servers and virtualization platforms provide tools and features that give IT the flexibility they need to successfully manage their communications network.

Use Your Own Virtual Appliance

See how much your company can save with a virtualized phone system.

Switchvox for VMware and Hyper-V FAQ

How do I buy Switchvox for a virtualized environment?
Switchvox is fully supported to run on VMware with the latest Switchvox OVF image. Simply purchase a Switchvox Software Registration Code and the appropriate number of Users for your system. Upon purchasing the Switchvox Software you will receive a link to download the VMware OVF image to get started.
What is the Switchvox Virtual Disk Image?
Choose a disk image with an appropriate amount of disk space allocated. The image lets you easily install Switchvox with VMware, and includes tools for fine-tuning your Switchvox instance.
Can I switch from a Switchvox Appliance to Switchvox Virtual?

If there are telephony cards used in the Switchvox appliance, those services will need to be managed with a gateway. In such a scenario, Switchvox needs to have a SIP provider defined for the gateway. See Sangoma's VOIP Gateways